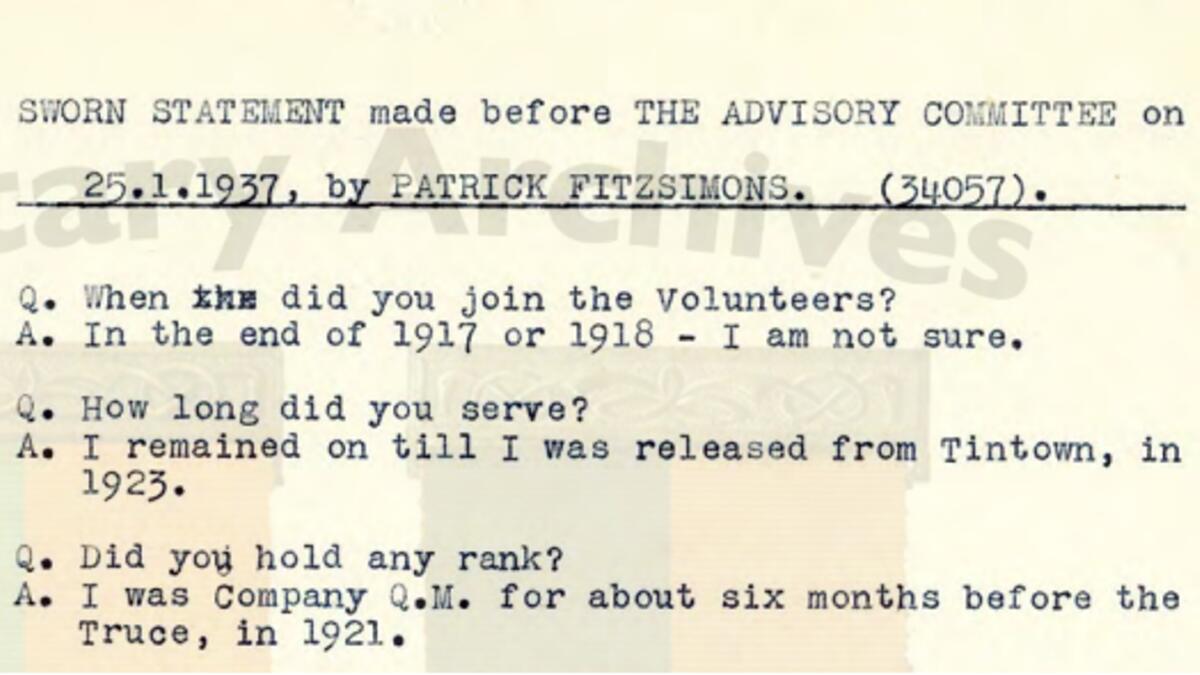 There are 23 Westmeath names under the latest tranche of military service pension applications (1916-23) released this week by the Irish Military Archives.

This is the 12th publication in the series since 2016 and addresses claims filed by 1,424 individuals/veterans or their dependents and provides new information on the Revolutionary War and Civil War. The documents offer significant insights into life after the conflict.

Taking into account all MSPC file series, approximately 111,680 files have now been cataloged and made available for online viewing.

The bulk of the newly released files concern female applicants (1,099) under the Military Service Pensions Act 1934, the vast majority of whom were unsuccessful.

Two of the successful applicants were from Westmeath – Mary Ginnell and Rose Maguire (née Ginnell) of Rosmead, Delvin. They were active in Cumann na mBan during the Revolutionary War and Civil War and were nieces of Westmeath MP and later TD, Laurence Ginnell.

In 1956, Rose Maguire, then 63, was granted a year and a half service for pension purposes related to her service between April 1920 and July 1921. Along with her sister Mary, she prepared first aid kits; has done shipping work; cares for, feeds and quarters IRA officers and men at her home; took care of documents, weapons and ammunition.

She also provided use of her family home as IRA headquarters and a meeting place for the local brigade officers, and went through enemy lines to warn IRA officers and men of attempted British raids. Her sister Mary was granted a similar pension.

However, the Ginnell women were among the luckier applicants. Many others, such as Elizabeth Hughes of Corner House, Kinnegad (also included in the latest issue), had their applications denied.

Mrs Hughes applied for an annuity for the entire period 1916 to 1923, telling the annuity magistrates that during Holy Week 1916 she delivered oral messages and arranged for IRA men at Athboy, Co. Meath to evade capture by doing herself was arrested. As a result, she was “manhandled” by Crown forces and her property destroyed. However, the fact that Mrs. Hughes did not give a date for this activity seems to have worked against her.

In stark contrast is the case of Patrick Fitzsimons (1893-1961) of Cummerstown, Collinstown, who under the 1934 Act was granted three and 13/36 years of active service for pension purposes – practically all the service he claimed.

Mr Fitzsimons joined the Irish Volunteers in 1917 and at the height of the Revolutionary War was making buckshot and refilling gun cartridges, raiding Crown offices, transporting guns and taking part in the burning of Collinstown RIC Barracks where he was burned. “The other guy lit the match, even though I told him not to, and there was an explosion that closed the window and we got caught in the fire. My topcoat was burned and my hair etc,” he said.

Mr Fitzsimons was involved in the attack on Castlepollard RIC Barracks in July 1921, hours before the Armistice came into effect. During the Civil War he took the anti-Treaty side and was involved in the Barbavilla ambush outside of Collinstown. He was captured by the National Army and interned at Tintown camp in the Curragh.

“This man had very little combat, but it seemed to us that had the district been more active he would have done his part,” the Army Pensions Committee said before sanctioning his full pension.

Also featured in the latest issue is Edward ‘Ned’ Connell from Tullystown, Castletown, Finea. Mr Connell unsuccessfully applied for a Revolutionary War pension from the IRA’s Finea unit, which was attached to Seán Mac Eoin’s Longford Brigade. Activities he was involved in included a gun raid on the home of John Hand, Bigwood, Castletown Finea.

As Connell and four other IRA men approached the house, Hand shot them and Connell was wounded in the right thigh and groin. He was treated at the Granard Workhouse but had to leave to avoid arrest and ended up in a bog hut for seven months while IRA comrades tended his wounds. He received a £50 tip in 1924, but failed to qualify for a pension or special allowance.

Meanwhile, another Westmeath applicant – Mary Josephine Mallon (née Brady), who ran the Streete Post Office in the 1940s – was denied a pension despite detailed testimony alleging that she was extensively employed at Cumann na mBan in Longford worked.

The list of applicants in the latest Military Service Pensions Collection can be found here, while the database is searchable here.

Delta 8 disposable pen vs. cartridges: how do you choose between the two?

Toyota and Woven Planet have developed a portable hydrogen cartridge